In this blog post, we discuss how to train a DenseNet style deep learning classifier, using Pytorch, for differentiating between different types of lymphoma cancer. This post and code are based on the post discussing segmentation using U-Net and is thus broken down into the same 4 components:

This blog post assumes moderate knowledge of convolutional neural networks, depending on the readers background, our JPI paper may be sufficient, or a more thorough resource such as Andrew NG’s deep learning course.

DenseNets were introduced here, so please refer there for a complete description. Instead, here we discuss only the high-level intuition needed to complete this tutorial. 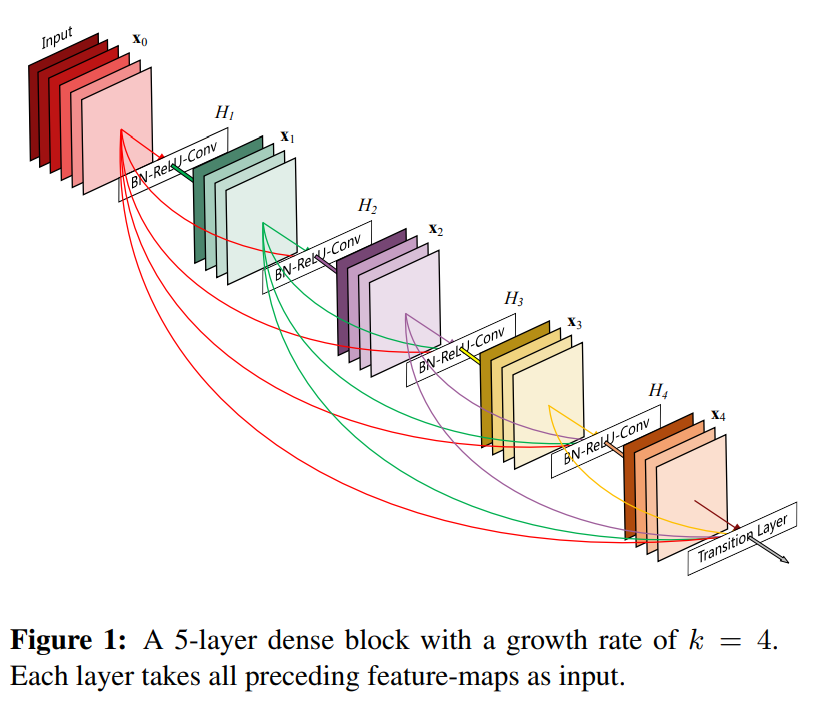 These blocks are the workhorse of the densenet. Inside this block, the output from each kernel is concatenated with all subsequent features. When looking at x_4, one can notice that there are 4 other additional inputs being fed into it (i.e., yellow, purple, green, and red), 1 from each of the previous convolutional layers. Similarly, x_3 has 3 inputs, x_2 has 2, and x_0 has none as it is the first convolutional layer.

Multiple sets of these blocks are then sequentially applied, with a bottleneck layer in between them to form the entire network, which looks like this:

The authors of this approach claim “DenseNets exploit the potential of feature reuse, yielding condensed models that are easy to train and highly parameter efficient”.

Unpacking this, we can see the reasoning for these claims:

2) Features learned at the earlier layers, which likely contain important filters (for example edge detectors) can be reused in later networks directly as opposed to having to be relearned anew. This both (a) reduces the overall amount of feature redundancy (each layer doesn’t need to learn its own edge detector), resulting in fewer overall parameters, potentially less opportunities for overfitting, and (b) result in faster training times than e.g., ResNet (no additional computation required on “inherited” data in densenets, while resnets require additional operations)

These claims seem justified when looking at the comparison to other network architectures: 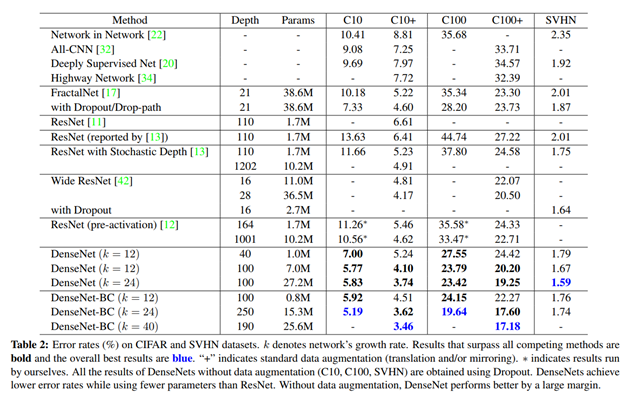 Regardless of the desired model type used for the classifier, deep learning (DL) is typically best performed using some type of a database backend. This database need not be sophisticated (e.g., the LMDB commonly used by Caffe), nor must it be a true database (e.g., here we’ll discuss using PyTables which has an HDF5 backend). The benefits of using a database are numerous, but we can briefly list some of them here:

I’ve written a blog post previously about the how to get images into a hdf5 table using matlab, but this blog post uses only python and is more refined. We also focus on the types of data necessary for a DenseNet, storing (1) both the original image and (2) its associated label into the database:

The code to do this is available here.

Note that this code chops images into overlapping tiles, at a user specified stride, which is very fast based on python views. If your experiment focuses on only smaller annotated pieces of the image, this code would need to be adjusted (e.g., ROIs of localized disease presentation).

That said, some specific items worth pointing out in the code:

Now that once we have the data ready, we’ll train the network. The Densenet architecture is provided by PyTorch in the torchvision package, in a very modular fashion. Thus the main components that we need to develop and discuss here is how to get our data in and out of the network.

Code is available here and that dataset was previously released here under “Lymphoma Sub-type Classification”.

One important practice which is commonly overlooked is to visually examine a sample of the input which will be going to the network, which we do in this cell:

We can see that the augmentations have been done properly (image looks “sane”). We can also note how the color augmentation has drastically changed the appearance of the image (left) from H&E to a greenish color space, in hopes of greater generalizability later. Here I’m using the default values as an example, but tuning these values will likely improve results if they’re tailored towards to specific test set of interest. 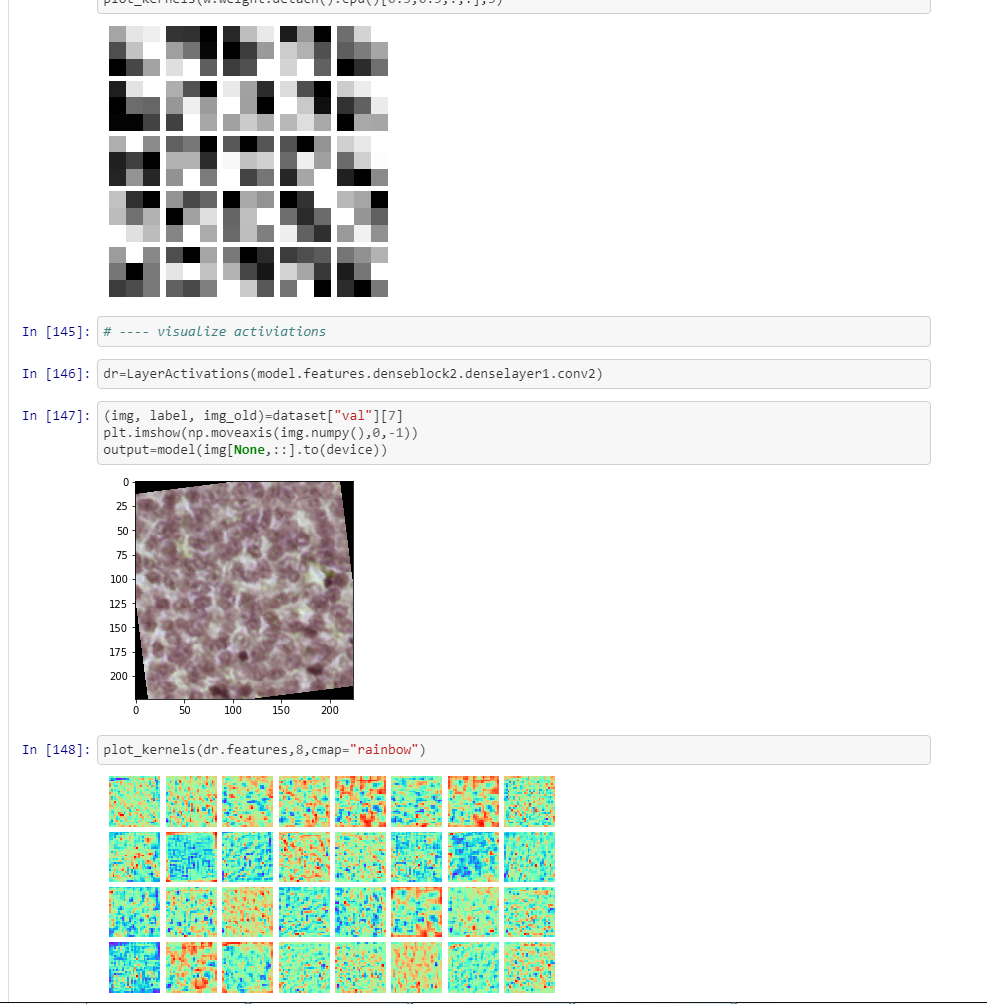 Visualizing results in the validation set

Since we’re consistently saving the best model as the classifier is training, we can interrogate the results on the validation set easily while the network itself is training. This is best done if 2 GPUs are available, so that the main GPU can continue training while the second GPU can generate the output. If the network is small enough and the memory of a singular GPU large enough, both processes can be done using the same GPU.

A minimal example of how to do this is provided here. Note that there is a very large code overlap with the training code, except pruned down solely to generate output 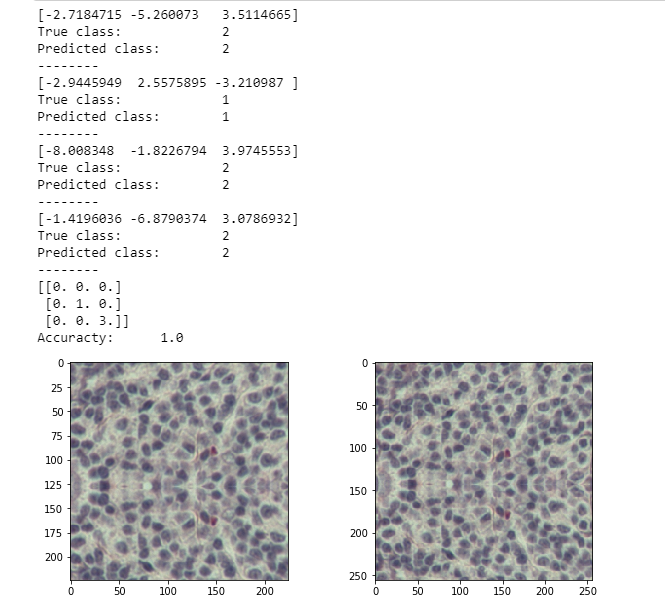 Given the other files, the code here should be rather self-explanatory when it comes to generating the output.

The output is generated in a naïve fashion, where a large image is chopped into overlapping tiles, those tiles fed as a batch to the model.

The output of interest is can be found near the bottom of the code, left for the user to decide what and how to save:

I’m hoping that you find this approach useful and generalizable to your own use cases.

This project is of course a work in progress and will be updated, so please keep track of the revision numbers at the top of the files to ensure that you’re using the latest and greatest version!

Any questions or comments are of course welcome!