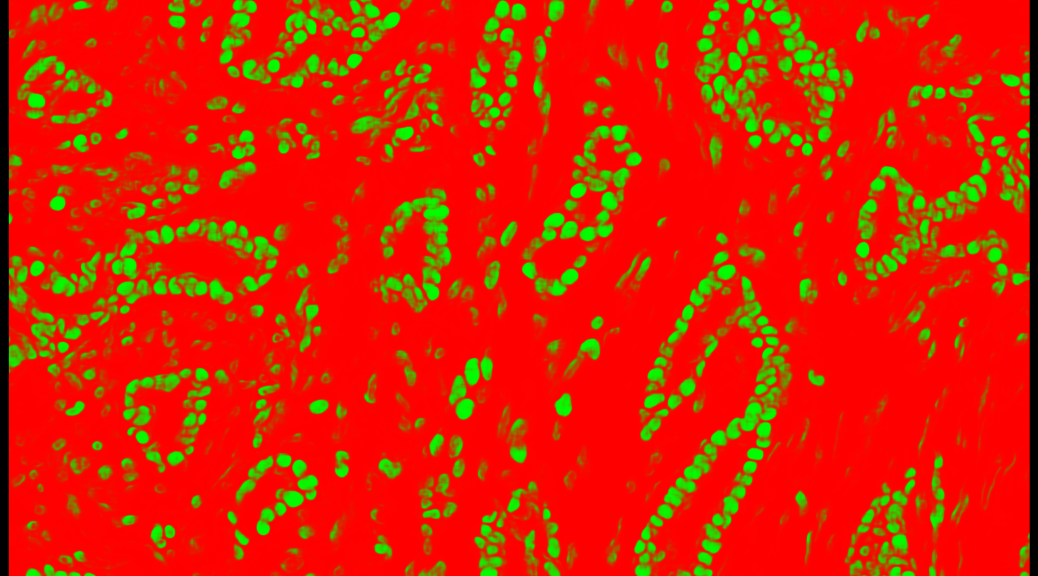 This blog posts explains how to train a deep learning nuclear segmentation classifier in accordance with our paper “Deep learning for digital pathology image analysis: A comprehensive tutorial with selected use cases”.

Nuclei segmentation is an important problem for two critical reasons: (a) there is evidence that the configuration of nuclei is correlated with outcome [2], and (b) nuclear morphology is a key component in most cancer grading schemes [27],[28]. A recent review of nuclei segmentation literature [29] shows that detecting these nuclei tends not to be extremely challenging, but accurately finding their borders and/or dividing overlapping nuclei is the current challenge. The overlap resolution techniques are typically applied as post-processing on segmentation outputs, and thus outside of the scope of this tutorial.

We have specifically chosen to look at the problem of detecting nuclei within H&E stained estrogen receptor positive (ER+) breast cancer images. Breast cancer nuclei are, in my opinion, the most challenging to work with because of their large variances in appearance as compared to other organs. For example, the area of a breast cancer nucleus can vary by over 200% and have notable differences in texture, morphology, and stain absorption. These differences imply that developing a single hand-crafted approach that works well across all cases is challenging. We find that on our dataset we can obtain f-scores in the range of ~.83, without any post-processing, making this DL approach comparable to sophisticated handcrafted approaches.

Each image is prefaced by a code (e.g., “12750”) to the left of the first underscore (_), which coincides with a unique patient number. A few patients have more than 1 image associated with them (137 patients vs 143 images), so make sure to split them into training and testing sets at the patient level, not the image level.

The data and the associated masks are located here (1.5G).

train_w32_1.txt: contains the filenames of the patches which should go into the training set (and test set when using test_w32_1.txt). The file format is [filename] [tab] [class]. Where class is either 0 (non-nuclei) or 1 (nuclei). An example of the file content is:

It takes 2 command line arguments, base directory and the fold.

It most likely will take a long time to apply a the classifier pixel wise to an image to generate the output. In actuality, there are many ways to speed up this process. The easiest way is to identify pixels in the image which are very unlikely to belong to the nuclei class (for example, low absorption of hematoxylin dye as determined via color deconvolution) and exclude those from computation.

It is very important to use the model on images of the same magnification as the training magnification. This is to say, if your patches are extracted at 40x, then the test images need to be done at 40x as well.

72 thoughts on “Use Case 1: Nuclei Segmentation”