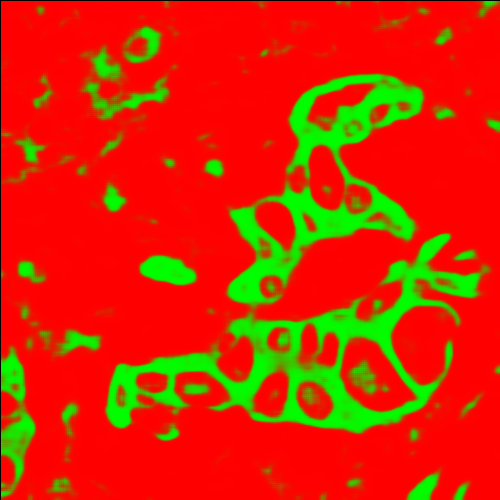 This blog posts explains how to train a deep learning epithelium segmentation classifier in accordance with our paper “Deep learning for digital pathology image analysis: A comprehensive tutorial with selected use cases”.

If you’ve already read the Use Case 1: Nuclei Segmentation, in this tutorial you can focus on “Step 1: Patch Extraction”, which contains all the differences from the nuclei tutorial.

The identification of epithelium and stroma regions is important since regions of cancer are typically manifested in the epithelium. Additionally recent work by Beck et al. [31] suggest that histologic patterns within the stroma might be critical in predicting overall survival and outcome in breast cancer patients. Thus from the perspective of developing algorithms for predicting prognosis of disease, the epithelium-stroma separation becomes critical.

Given that our AlexNet approach constrains input data to a 32 x 32 window, we need to appropriately scale the task to fit into this context. The general principal employed is that a human expert should be able to make an educated decision based solely on the context present in the patch supplied to the DL network. What this fundamentally implies is that we must a priori select an appropriate magnification from which to extract the patches and perform the testing. In this particular case, we down sample each image to have an apparent magnification of 10x (i.e., a 50% reduction) so that sufficient context is available for use with the network. Networks which accept larger patch sizes could thus potentially use higher magnifications, at the cost of longer training times, if necessary.

The dataset consist of 42 images ER+ BCa images scanned at 20x. Each image is 1,000 x 1,000. The epithelium region was manually annotated across all images by an expert pathologist.

The format of the files is:

Each image is prefaced by a code (e.g., “8918”) to the left of the first underscore (_), which coincides with a unique patient number. In this dataset, no patients have more than 1 image associated with them (43 patients  = 43 images).

The data and the associated masks are located here (336M).

train_w32_1.txt: contains the filenames of the patches which should go into the training set (and test set when using test_w32_1.txt). The file format is [filename] [tab] [class]. Where class is either 0 (non-epithelium) or 1 (epithelium). An example of the file content is:

It takes 2 command line arguments, base directory and the fold. Make sure to edit line 88 to apply the appropriate scaling; in this case reduce 20x images to 10x images by resizing by 1/2.

Notice that the output masks are 500 x 500, or 1/2 the size of the input masks. This is very important, we trained the classifier at 10x, so we need to test it at 10x. Since the images are all taken at 20x, we down-sample them to obtain the correct apparent magnification .

It most likely will take a long time to apply a the classifier pixel wise to an image to generate the output. In actuality, there are many ways to speed up this process. The easiest way in this case is to simply use a larger stride such that you compute every 2nd or 3rd pixel since epithelium segmentation doesn’t require nearly as much precision, as say, nuclei segmentation.

12 thoughts on “Use Case 2: Epithelium Segmentation”